It’s a simple harmonica mount. An altogether nondescript nickel-plated halo that hugs its wearer’s neck. It holds in place a similarly unpretentious harmonica between the jaws of a spring clamp.

QLI speech-language pathologist Kyra Marsh slips the brace over the head of 23-year-old Wisconsin native Michael Daavettila, who waits reclined in a powered wheelchair. He watches the thin metal band pass out of sight and flashes a smile when the harmonica settles in place just centimeters from his mouth.

“You doing okay?” Kyra asks. Michael spends a half beat to make eye contact. He is many months, verging on a full year, into rehabilitation for a catastrophic spinal cord injury. While he has sensation down to the tips of his fingers, for now only the muscles above his shoulders respond reliably.

He takes a breath.

“Yes,” he says. The statement is quiet. Almost imperceptible. Someone not listening for whispers would have missed it entirely.

“Are you ready?” Kyra asks. Again, Michael smiles. Widely this time, as if humored by the punchline to a joke only he can hear. He fires off a wry response.

Laughing, Kyra presses the frame of the mount toward Michael, pushing the harmonica itself within reach. He catches the instrument with his lips and forces a swell of air through its mouthpiece.

The ensuing noise, a brightly-pitched wheeze, fills the room. The single note is held for the length of Michael’s exhale, slowly sighing into quietude. Then, as Michael draws breath through the reedplates and deep into his lungs, the harmonica sings again.

Nothing about Michael’s story conforms to expectation. An otherwise unassuming late-night dive with friends in June 2019 became the event that changed everyday life—the accident resulted in a severe fracture in the vertebrae of Michael’s upper neck.

But even amongst cases of high-level spinal cord injury, where no two situations ever follow a predictable template, Michael faced unique challenges.

Chief among them: a compromised respiratory system and a constricting stenosis of his airway. Put simply, Michael couldn’t breathe without assistive measures, and the necessary treatments—including a tracheotomy, an intensive steroid treatment, and an eventual system of respiratory valves installed directly into his throat—would further inhibit his ability to push air to his nose and mouth. 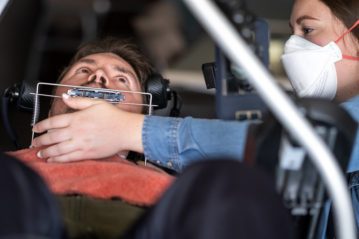 He went speechless for nearly six months, communicating instead with side-eyed glances and a big, toothy smile, one that conveyed the huge personality eager to burst into plain view.

After December, as QLI specialists began working on maximizing his independence, Michael’s powered wheelchair was fitted with a Tobii Dynavox—an adaptive tablet doubling as a fully functional computer with one crucial advantage: It could be operated by eyes alone. No mouse, no keyboard, no touchscreen necessary.

Michael’s world reopened, even if only by slight degrees. The tablet’s eye-tracking technology gave the gift of access. Access to his email, to Skype calls and video conferences with family, to the monumental outpouring of support he received every day via social media, even to his Netflix account for some downtime binge watching.

Though only a start, and though it was slow going, typing messages one methodical staredown of a letter at a time, it gave Michael an opportunity to reclaim something normal.

It made for good timing. Because “normal” was about to become an idea in short supply.

During his rehabilitation stay, Michael’s family had begun renovations on their Wisconsin home, modifications that would allow him to access the house despite the need for a wheelchair. The changes would be expensive and time consuming, however, so in the interim the family collaborated with QLI to find a provisional housing solution.

But plans to temporarily relocate Michael to a nursing facility had only been freshly confirmed before the widespread effects of COVID-19 shredded protocol into ribbons. As healthcare facilities across the country responded to the hazardous implications of a pandemic, it became clear that a transfer from one facility to another would be more complicated, and more dangerous, than originally expected. Eventually, Michael’s move was cancelled altogether.

Instead, Michael’s clinical experts lobbied to keep him housed on QLI’s Rehabilitation Campus, where they could push further and with greater focus on the skills he’d begun to rebuild. In large part, that meant his respiratory control and speaking ability.

“We reassessed the effects of his steroid treatment,” said Kyra, “and the results were really promising. The restriction to his airway wasn’t structural. If we could rebuild endurance in his deconditioned respiratory system, there was a clear opportunity to get Michael speaking again.” 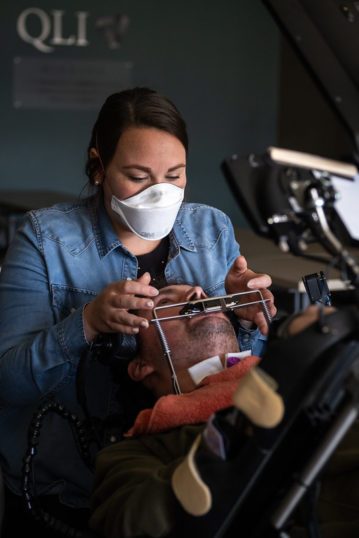 Michael focused on training with respiratory valves, essentially relearning how to breathe in and out. To facilitate appropriate breathing patterns, Kyra applied and removed pressure on Michael’s diaphragm in conjunction with inhalation and exhalation.

After some practice, the progress was nothing short of exciting. Michael confidently pushed air through his airways and spoke at whisper-low volumes. Motivated by FaceTime chats with his niece, Clara Beth, he was even occasionally hitting audible levels.

“Family is a big motivator for me,” Michael says. “When they see my progress, I feel like I’m really moving forward.”

In late March, Michael’s harmonica symbolized a turning point. Once a simple gift to Michael from a friend, it became a tool to amplify his newfound respiratory strength.

“Michael is always pretty open to try creative strategies in therapy,” Kyra says, “but the harmonica was different. He was really excited for it right away.”

He was no stranger to manning a musical instrument—he’d played trombone in school, after all—but his training behind the harmonica put function first. Still working on regaining function in his upper body, early harmonica sessions focused on head movement, a skill with tremendous short-term upside as he learned how to operate his powered chair with headrest-mounted triggers.

And yet, his breathing benefited most. By holding notes for as long as possible or practicing scales with a calculated series of inhales and exhales, Michael intersected his interest in playing harmonica with the need to build respiratory endurance.

“If you think about the kind of exercises we have to do to rebuild respiratory stamina, there’s no way I could convince someone to practice sustained inhales and exhales for an hour at a time,” says Kyra. “But with Michael and this harmonica, he’s able to perform a huge amount of respiratory training. Even in a few weeks, we’ve seen major gains.”

“I feel like it’s night and day,” he says, fully conversational at the end of an hour-long chat. “I can tell my speech has improved a lot since we’ve started playing.”

It’s a staggering experience, hearing Michael speak. Particularly staggering for those who know how hard he has worked and how far he has come.

Pockets of quiet in his speech remain—faint, breathy whispers you have to lean in close to catch. But more frequent now are the full-voiced verbalizations. Stretches of minutes in which he’ll sing entire verses of a song or enunciate words with unmistakable clarity.

It’s a testament to his clinicians’ creativity and, perhaps more obviously, Michael’s own miraculous will to thrive.

In an ironic twist, it’s also a way in which, for Michael, the COVID-19 lockdown was a boon, not a bane. The extra time within QLI’s Rehabilitation Campus served as fertile ground for his blooming skills.

“Our original rehabilitation plan was very much about function,” says Kyra.

“That was about getting him functional at home. But the extra time allowed us to think bigger, to incorporate some ‘reach-for-the-sky’ goals, things we wouldn’t have been able to pull off otherwise. Every day of his life is going to be better for the time we had with him.”

When asked if he felt spending the lockdown at QLI improved his life, he gives a familiar response. One that makes everyone in the room laugh:

Except this time, the statement isn’t a whisper.

This time, everyone can hear him say it.