Terri Camara has an affectionate name for the recipe she’s making. She calls it “Hobo Stew,” the same thing her grandmother and grandfather called it when they cooked for traveling workers hitching rides between California train cars.

That was many decades ago. But the childhood memory still registers a pang of nostalgia. Today, between efforts halving potatoes and chopping onions at an adaptive cutting board, Terri enjoys the pleasure of reminiscence.

Her grandparents’ house, she recalls, came to California all the way from Oklahoma by way of truck bed. Her grandfather paid $42 to travel that distance in a taxi. She laughs at the absurdity of the notion. But it was a different time, a time when the BNSF trains brought itinerant freighthoppers past the house every Friday, where they’d jump from the rails to her grandparents’ warm accommodations.

“My grandparents set up a shaving station,” Terri says, “and a place for them to take showers and patch the holes in their clothes. They’d talk to us about jobs they’d done or about their families. They weren’t bums or freeloaders. These were men just working for a living, just riding from town to town.”

For the travelers, and for Terri, too, this was the feeling of home and all of its securities. The feeling that things were alright and that, no matter where the next train might rumble off to, there would always be a way forward. As a matter of routine, these weekly visits culminated in dinner—the main course, a hearty hamburger stew boiled with the vegetables picked by the travelers themselves from a nearby garden, all of it cooked together in a single cast-iron kettle over an open flame. 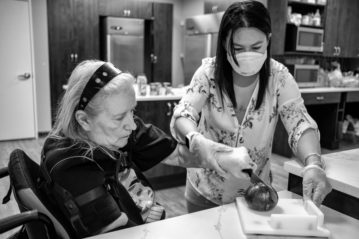 It’s what Terri is making today, sometimes seated in a wheelchair within QLI’s Mona Faith Kitchen and sometimes standing over a stock pot on the stove. A clinician clings on to a gait belt around Terri’s midsection as she stirs the ingredients together into a seasoned broth.

Cooking a batch of her grandmother’s Hobo Stew is, of course, a quaint way to reconnect Terri to her childhood. But it also represents a clever exercise in functional therapy. The 61-year-old Wyoming resident is at QLI as a participant of its stroke rehabilitation program, herself the survivor of a stroke suffered months ago back home.

As with many catastrophic injuries, survival is only a starting point for recovery. And now, weeks into rehabilitation at QLI, recovery is a thorough and complex process. Terri’s clinicians collaborate each day to map physical and cognitive assessments onto the relevant parts of her life—both a strategy to ensure her engagement and a means to trigger change on a neurological level, where the stroke impacted Terri the most.

Hemiparesis refers to a neurological impairment to the strength and general mobility in one side of the body. It is one of the most common side effects of a stroke.

In Terri’s case, her right arm and right leg saw significant loss of function, preventing her from walking normally or utilizing her right hand in functional situations. 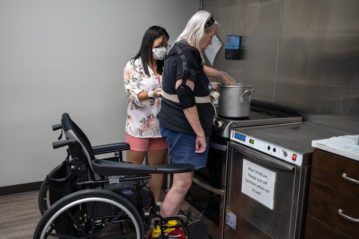 Therapy at QLI became a concerted movement to reinforce Terri’s weakened right side, itself a veritable stew of clinical approaches—like functional electrical stimulation and adaptive gait training—to spark neuromuscular re-education. These approaches proved transformative, maximizing her ability to complete day-to-day tasks with minimal assistance. By July, with the help of specialized cane, she was even successfully walking more than 200 feet in single efforts. An indication that training and expertise might eventually help Terri break from impairment toward something bigger: independence.

But as a cook in her hometown, one who understands how a simple stew can turn disparate elements into a whole greater than the sum of its parts, Terri is taking advantage of opportunity. Guided only gently by therapists in the kitchen, she works through the nuances of meal preparation. Heating the stove to the right boiling point. Training the muscles in her unsteady hand and arm to confidently knife through vegetables. Supervising multiple workstations like a performer spinning plates. 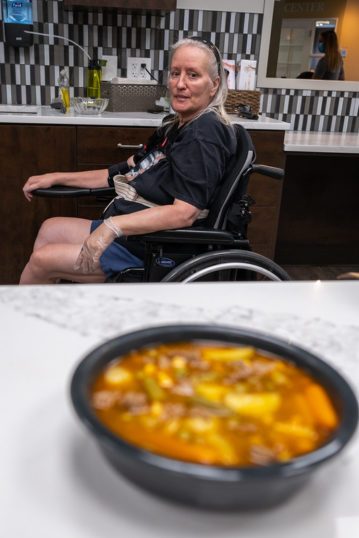 After an hour, the stew is ready. It has traveled decades to get here, from California to Omaha, Nebraska. And for Terri, it’s only a sign of things to come. A stepping stone for future progress.

“You know, we used to serve this with cobbler and cornbread,” Terri says, joking. “But for now, this will do.”