In the hills of Cody, Wyoming, roads are being built. Such progress demands a company with a backbone cemented in the area—a company like Wilson Bros. Construction. Megan Wilson, daughter of Wes, one of the company’s founders, coordinates the safety operations of their contracts. No stone is left unturned when Wilson is involved—she’s always the first one on-site. “I ensure we are OSHA compliant and that everything required to keep workers safe is readily accessible.” Megan is implicitly respected and trusted—the success of Wilson Bros.’ operations relies on the steadfast guidance she provides. Through it all is to a desire to excel.

Two years ago, Megan began pursuing a master’s degree in construction management. For her, it is a natural step forward, something to benefit both herself and the company. “Higher education has always been something that is valued in our family,” says Megan. “Even if it took a while, I knew it was something that would be worthwhile.”

In October 2021, in the midst of the pandemic and in the final semesters of her master’s degree, Megan began to feel ill. She had a headache, fatigue, and an overwhelming sense that something was very wrong. Megan pushed through the symptoms, focusing on the work in front of her. Megan’s coworkers encouraged her to stay home and get some rest.

After one day of staying home from work, her father found Megan on the floor of her home.

She did not remember how she had gotten there or what had happened. She could not move the right side of her body. “I couldn’t even speak,” Megan says. She had suffered a left-sided stroke, a result of COVID-19.

Megan arrived at Billings Hospital in Montana and described the process as a complete whirlwind. Her trademark confidence shifted into fear. Her speech came back piecemeal. She struggled to find the words to express her thoughts—a common and frustrating result of the aphasia caused by her stroke. In addition to her communication impairments, Megan’s right side was drastically weakened, and she wore a shoulder brace and a glove to control the swelling in her hand.

“My medical team talked to me about QLI and what it had to offer. I felt scared,” Megan says. “I closed in on myself.” Prior to the stroke, Megan was a fearless and strong businesswoman, always leading the charge with a surefire manner. Her condition now forced her to place trust in others. 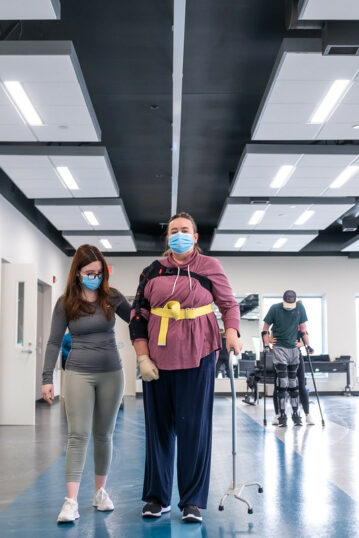 When Megan came to QLI, the fear remained. “Everyone was lifting me up, encouraging me to try new things,” Megan remembers, “but I didn’t do anything to try and change my perspective. I was stuck and couldn’t remember how to be the person I was before.” Megan arrived at QLI in December 2021, and this fear persisted until late January. At that point, Megan understood what she needed to do. “I spoke with my therapist and with the Housing Coordinator about what I would have to do to succeed, and my perspective shifted.

“If everyone around believes in me so much, why can’t I?”

After this realization, Megan incorporate a breathing technique recommended by clinicians from QLI and Billings Hospital. As a way to address her anxiety and focus on the strengthening exercises, it started in a short burst—“one, two, three,” she would say. She continued working with physical therapist Sammy Porter on the complex goal of rebuilding strength and re-engaging Megan’s affected right side.

She was charged with moving her right foot up and over a small plastic cone, finally resting it gently on the ground. Though a simple exercise, this was crucial in the stages of rebuilding Megan’s confidence, strength, and balance. “All it took for me to feel better was just a little bit of practice,” Megan says. In early sessions, Sammy would demonstrate for Megan, before encouraging her to try it herself. In her first attempts, Megan’s right foot and leg trembled. A look of fear crept back into Megan’s eyes. She closed them and began to use the breathing technique, slowly saying “one…two…three…”

Her heart stopped racing and her breathing became smooth and steady. She stepped over the cone with ease. Nevertheless, a bigger challenge was on the horizon.

For Megan, the ultimate goal was to move back to her home. To do this safely, she would need to be able to get herself off the floor if she were to fall. Her right-sided paralysis made this extremely difficult. Consequently, floor transfers became a focal point of her physical therapy sessions with Sammy. What happened on the first day of attempting these defined the rest of her recovery. After Sammy assisted Megan onto the mat, she laid flat on her stomach.

“Nice job,” said Sammy. “Now, I want you to get onto all fours.” Megan slid her left leg forward smoothly.

Next came the right leg.

Megan tried. Five times. Ten times. It became too much. She collapsed onto the mat and began to cry.

Sammy knelt down beside her. “Nobody gets this instantly. This is one of the hardest things you’ll do in therapy.” Megan didn’t respond, and Sammy encouraged her to focus on her breathing.

After a few minutes, Sammy asked, “Do you want to try again?”

Megan collected herself and took a deep breath.

At last, Megan believed in herself as much as others did.

With a newly discovered sense of determination, Megan discharged from QLI in April 2022 and returned 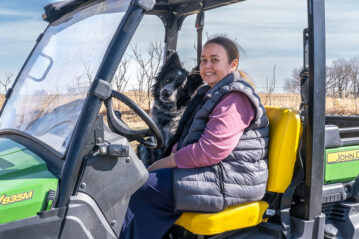 home to Wyoming, she fully embraced this concept. She lives with her father, Wes, in their family home. “I do a few therapies a week now, and can drive to my therapies in town,” she says. “Hopefully I can tackle bigger routes. It was difficult at first but I’ve gotten used to it.”

Megan has continued her master’s degree pursuit, though she acknowledges the barriers. “There are some things I need to accomplish for classes that I just can’t do right now,” she says, “such as writing a 12-page paper for a class. I’m focused on my recovery, and taking some classes a bit at a time, moving at a much more manageable pace. I will get the degree, and I’m okay with having to wait a little bit longer.”

After all, she is still here, having accomplished so much since her injury. A year extension towards her graduation date seems an acceptable concession when considering a year ago Megan’s life was altered in such a massive way, her future so very uncertain.

Megan foresees a day where she will not only return to living on her own, which she hopes to accomplish sometime within the next few months, but also a return to her job—doing what she does best. All around her know she can and will. 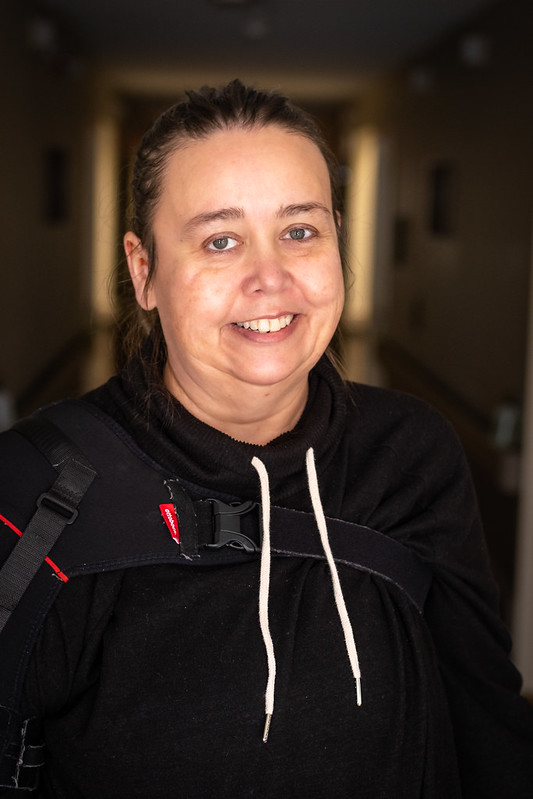 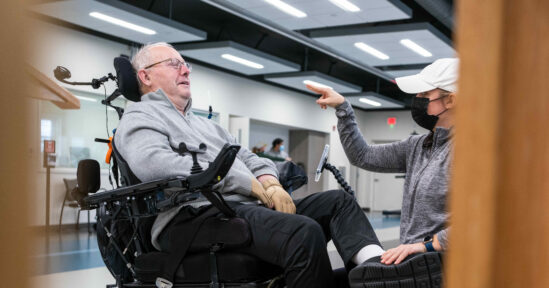 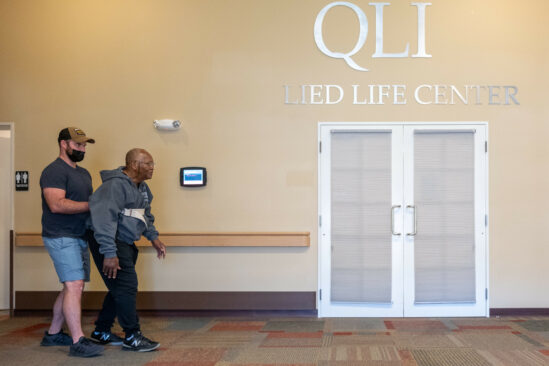 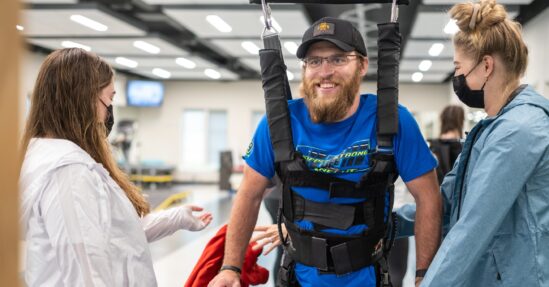