Father Glen Wilwerding | A Morning at Ragbrai, A Glimpse of Recovery

The rain falls in sheets.

Big, heavy drops like coins coming straight down from a textureless overcast sky. They land with pelting force, slapping noisily off the cars and RVs and campers seeking temporary refuge in the abandoned parking lot of an emptied, months-closed Kmart.

Just a dozen feet north of the lot, Iowa State Patrol officers block eastbound traffic. They’ve reserved half the roadway with a row of cones and cindering road flares that run the length of rural Iowa’s Highway 6 for miles. Where there were once cars, now cyclists flood the path in loose formations. Sometimes in twos and threes, sometimes pulling mesh baby carriers, sometimes in single-file trains that seem to string on for a half-hour at a time.

The riders peel off the highway in a northeast vector. They embark on the first of many rural stretches of RAGBRAI, an annual week-long cycling trek that has turned into the longest, largest, and oldest recreational bicycle touring event in the world. Rough estimates count over 10,000 cyclists pedaling the nearly 430-mile trail across Iowa.

They start here. In the rainy, arboreal hills of Council Bluffs. 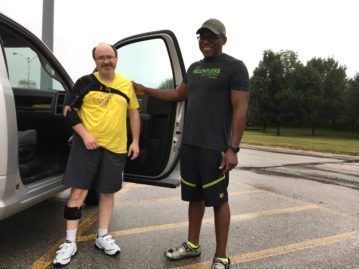 For a moment, Father Glen Wilwerding, a Council Bluffs-area priest, watches from behind the rain-streaked passenger-side glass of a QLI pickup truck. He tracks the cyclists as they sail down the hill and sweep around a bend drawn with traffic cones.

At the back of the truck, QLI residential team member Tafadzwa “TG” Ndoda and Father Glen’s brother, Gary Wilwerding, lift a silver TerraTrike—a long, three-wheeled recumbent bike offering reclined seats for two riders—from the pickup bed. Together, TG and Gary set the bike onto the parking lot concrete and wheel it into place.

TG steps to the passenger-side door and opens it. Inside the cab, Father Glen looks up from under the doorsill at the gray sky. Raindrops clap off the exposed interior door panel.

“What do you think?” TG asks, a question not entirely about the ride or about the rain.

Father Glen eyes the TerraTrike, then flashes a smile at TG.

Today looks a little different for Father Glen than he’d expected. An avid cyclist himself, he’d trained for months to ready himself for this very moment—the first leg of the first day of his first-ever RAGBRAI. He’d proudly taken part in a slew of local rides and cycling challenges. Things like Omaha’s annual Owl Ride, whose distinct t-shirt he, to this day, keeps in regular rotation.

Two months ago, everything changed. 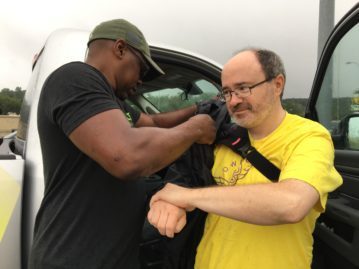 His left leg and right arm suddenly became weak—too weak to walk, too weak to write or use to hold a fork. Even worse, over a period of weeks, it became harder and harder to find the words when trying to speak.

These slow, creeping stroke-like symptoms were robbing him of the things that mattered most.

He was forced to step away from his responsibilities at Council Bluffs’ new St. Patrick’s Catholic Church, a church he had himself pitched in to remodel in recent years.

After a lifetime of helping others find their path, Father Glen had to face the reality of rediscovering his own.

“It started with a question, really,” TG says. “I saw him wearing a biking shirt, and asked his family whether he’d be interested in being a part of RAGBRAI.”

TG, a direct support team member for the residents on QLI’s rehabilitation campus, first positioned the suggestion on a small scale. If Father Glen was receptive to the idea, TG thought, they could visit the RAGBRAI campground festival the night before the ride began. After pitching a collaboration with QLI’s adaptive sports and therapy teams, TG realized the experience could turn into something greater.

Using the same tandem TerraTrike they’d eventually take for RAGBRAI, TG and Father Glen attempted a trial ride around the square-acre lake at QLI’s campus. The ride was both confirmation and reiteration. Not only was Father Glen physically capable of an outdoor ride over varied terrain, he wanted to challenge himself on the trail.

“I was surprised at how much work Father Glen was doing on the ride,” TG says. “It was encouraging. The man pedals hard.” 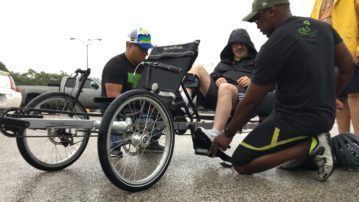 Father Glen situates himself in the rear seat of the recumbent bike. His feet clip into the pedals and a protective chest strap loops across his breastplate, under his arms, and around the aluminum seat supports. He hands his cane to his brother, who stows it away in the cab of the truck.

The rain hasn’t slowed, but the bike—with TG at the helm and Father Glen providing a visible boost—glides out of the parking lot undeterred.

At the road entrance, an Iowa State Patrol officer asks them to hold position for a proper window. The cyclists seem infinite, coming through the forest pass at the top of the hill with numbers that show no fatigue.

Finally, a gap. A breach between two clumps of riders. The officer steps out of the intersection and waves the TerraTrike onto the path. 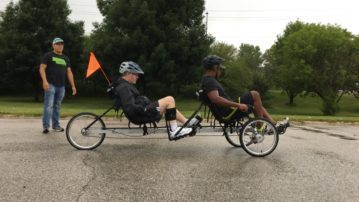 And, just like that, Father Glen is part of RAGBRAI. His first ever. Hopefully, the first of many.

The pair follow the trail at gentle pace. There is no rush, and this is no race. It is Father Glen’s second outdoor bike ride since his stroke, after all, the first since he and TG circled QLI’s campus lake.

After a little over a mile, they reach a massive, tented outpost giving riders shelter from the rain. It is here that one can find fresh sausage patties and griddle-made pancakes. Orange juice. Coffee to warm the bones.

The shelter is hosted by the Council Bluffs chapter of the Knights of Columbus, a Catholic organization dedicated to supporting charitable causes and promoting the well-being of families within the community. Nearly all here present today, all those who helped build the shelter overnight and feed the rain-soaked cyclists passing through, are parishioners of Father Glen’s church.

They recognize him immediately. And they give him little time to park the bike in a convenient place before they leave the protective canopy to greet him with handshakes, hugs, and warm welcomes.

Father Glen is a celebrity here, both a familiar face and a source of inspiration. He’s personally blessed many of these families’ homes, has joined them for dinners, has helped commemorate their successes and given guiding light through their hardships. And before anyone can retrieve the cane to help Father Glen navigate the wet soil and gravel on which the shelter sits, he has already sprung from the seat of the bike, walking without help, shaking hands with old friends.

They know his story. Some have even visited Father Glen for days of therapy.

For the moment his story doesn’t matter, not as much as his presence.

After the hosts have greeted the riders, they quickly give TG and Father Glen paper plates heavy with pancakes and sausage. Father Glen sidles through the volunteers, occasionally reaching out with his left hand, palm down, to greet new faces or give a gesture of thanks.

In turn, the parishioners thank TG for the hard work in bringing Father Glen to RAGBRAI and for stopping at the shelter. TG has a clever parry for the compliment: “Oh, no. He’s the one who pedaled us down here. He definitely brought me.”

By the time Father Glen and TG make the concluding mile-long trip back to their launch point, the familiar parking lot dotted with campers and buses topped with bike racks, the deluge of cyclists has thinned. The officers controlling traffic begin to clear the cones from the roadway.

Still it rains. But Father Glen is all smiles. He lobs a joke at TG as they disembark from the bike.

“Here to Crescent?” he asks. A beat passes. TG and Gary Wilwerding realize he’s asking if TG has the wherewithal to endure a ten-mile ride to Crescent, Iowa. The trio laughs.

Father Glen faces a winding road of rehabilitation. But he’s crossing goals off the checklist on the way. For now, it might only be one overcast stretch of RAGBRAI, but that represents an inspiring start. 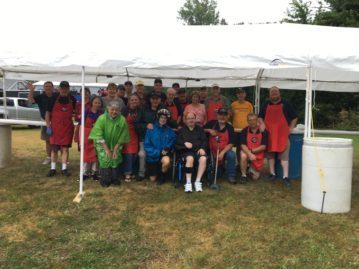