Back in the Saddle | Horse Trainer, Rodeo Professional Heather Morrison Takes the Next Ride 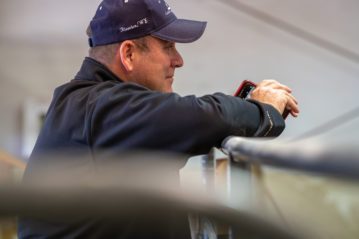 Tom Morrison leans forearms-first on the railing of the indoor riding arena at Omaha’s Heartland Equestrian Therapeutic Riding Academy (HETRA). He thumbs through images and videos on his phone, eventually playing one recording that stands out. It shows his wife, Heather, speeding horseback through a barrel race back in Wyoming, their home state.

The horse rockets into frame, the fine hair of its mane glowing under the high sun and a cloudless blue sky. Heather, its 47-year-old rider, wields the animal like a spear, carving straightly through open air and tucking into the sharp cloverleaf turns that weave between the course’s three 55-gallon drums.

It isn’t horse and rider seen in that video but rather one single shared understanding, a unified intent, both a bond and a manifestation of skill. A layperson might see such a maneuver and misunderstand the sheer precision of it. They might mistake its resting place on the fine line between the effortless and the impossible.

The horse rounds the final corner and storms out of frame, kicking only dusty plumes of topsoil loose into the air. The whole race begins and concludes in barely eighteen seconds. 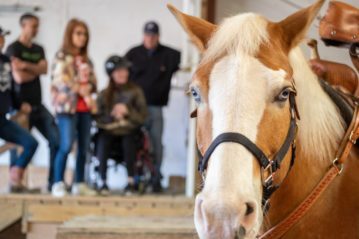 Tom pockets his phone. Heather waits nearby, presently in a wheelchair seated on a heavy wooden platform some three feet off the ground. Quietly, thoughtfully, Heather sits as HETRA staff to lead out a Belgian Draft Horse named Leroy. Heather smiles when she meets Leroy’s big, blue-gray eyes.

Leroy parks himself next to the platform. The flat of his back rises perhaps two feet taller than the platform itself. It takes Tom and a squad of therapists—a mix of QLI’s Life Path specialists and HETRA’s own instructors—to help Heather rise to her feet and settle into the curve of Leroy’s saddle.

The process requires watchful vigilance. All seven people moving Heather into place keep their arms outstretched, palms outward toward her. They position her legs astride the broad back of the animal and fasten her feet into the stirrups. A moment passes and the therapists observe Heather’s balance, making certain she isn’t in danger of a fall. 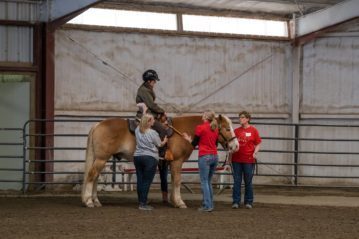 Tom and daughter, Hayvn, endured the turmoil of seeing Heather in the unreachable depths of a coma for weeks on end. Even when she woke and, in October, transferred to Craig Hospital in Denver, Colorado, her physical and cognitive function was minimal, what Tom refers to as “ragdoll-nothing.” Inactivity beyond stillness.

But then, a light. Hope. Change.

“The clouds pulled back from her,” Tom says about her time at Craig Hospital, where therapists first began working on returning voluntary movement to her arms, on correcting her then-doubled vision, and where she first began training to get back on a horse. 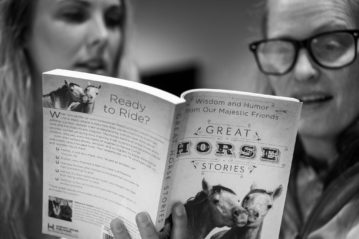 It does Heather no justice to state flatly that riding horseback is her passion. The depth of that passion can only be described the way Tom describes it, detailing the extreme care of her day-to-day routine.

The three, sometimes four, hours of sleep she’d accept every night before rising at daybreak. The morning rides on their Wyoming ranch. The family’s 11 horses she’d raised and broken herself. The evening rides she’d take and the training races she’d practice, even after a full day of work as an English teacher and media specialist at the local high school and hours of after-school activities with Hayvn. Heather is both a nationally regarded professional rider and a champion whose accolades are almost too numerous to tally.

The work ethic that defined her success before injury blossoms anew in the recovery that follows. After two months with the clinicians at QLI, Heather regularly walks the length of QLI’s second-largest building, the Lied Life Center. Her cognitive haze thins out each day. She recalls information more readily and articulates her thoughts more sharply with each statement. 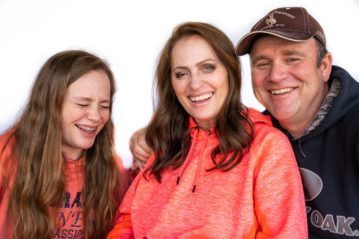 And she reacquaints herself with the sweeter things in life, the windows through which she can still be a mother to her daughter, a wife to her husband. When the time allows for both Tom and Hayvn to make the 11-hour drive from Wyoming to Omaha, Nebraska, they take advantage of Heather’s burgeoning strength. Not simply as visitors thankful for the blessing of Heather’s survival, but as family seeing a forward-facing path together. The three of them enjoy dinner out on the town, or a special trip to one of Omaha’s best-reviewed hair salons.

Tom says, “My fear was that she’d spend her life in a hospital bed. Looking out the window. Just staring at the mountains.”

He carries at all times on his person a hand-written list of the changes he notices. Words and observations scrawled on a blank sheet of printer paper folded into fourths. The list changes every time he sees her.

“She wasn’t even supposed to get up. But now look. She’s beautiful. Just as she always was.” 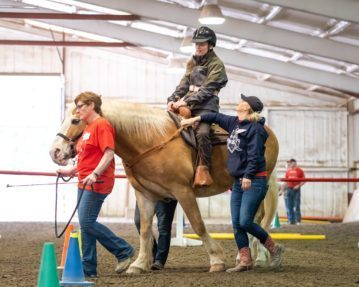 At HETRA, the day’s ride begins. Heather grips the saddle horn with both hands—one clamped flat on top and one clasped around the horn for stability.

Therapists flank Heather on all sides, four in total. They lead Leroy, and Heather atop him, out to the center of the riding ground. Small traffic cones—one orange, one yellow, one blue—dot the arena grounds at varying distances to test Heather’s sight. She calls them out one by one, naming each color accurately. Heather has to raise her voice to be heard. A good exercise for someone regaining the strength of speech.

Heather and Leroy, with therapists in tow, draw a wide circle around the nearest half of the arena. The horse keeps a slow walk, slow enough for the therapists to hover at its sides. Its turns are huge and sweeping and easy.

Tom watches from behind the railing with Ed Armstrong, QLI’s adaptive sports specialist.

“We’re trying to get her trunk stronger,” Ed says. “Trying to have the body know it’s going to one side or the other, recognizing it, knowing how to get it back.” 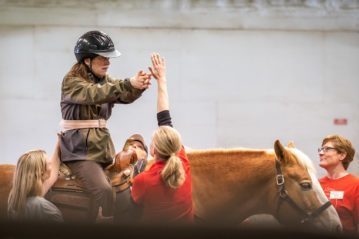 “There are therapeutic benefits here for someone who isn’t a horse-rider,” he says, “but it becomes so much more poignant when it’s tied to her life, something she used to do each day.”

He and Tom assess Heather’s movements—her impulses and reactions—in silence.

This is no barrel race, but the skills are the same. The memory, the knowledge.

Heather is alert, seeking out upcoming obstacles, cognizant of the distance between her stirrups and the fence to her side. She leans into the turns ever so slightly, pulls on the neck rein with a seasoned, gentle motion of the left hand. It’s a motion made from muscle memory.  A little piece of the past brought forward into the present.

There’s a moment of recognition. Tom notices it too. Heather smiles.

“Sometimes it’s just that old, normal movement that comes back when you give someone a functional task,” says Katherine Smith, one of the HETRA trainers working with Heather. Ed nods quietly. Tom keeps his eyes fixed on his wife. 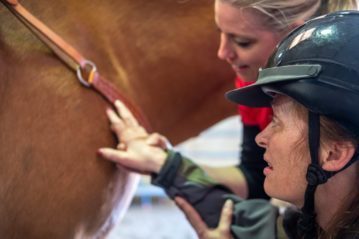 Heather reins Leroy around the arena for the better part of an hour. She stops the horse with a quiet “Whoa.” Tells it to start again with a comforting “Walk on.”

Eventually, at the raised platform with the help of her team of therapists, she dismounts from Leroy. The horse takes in big breaths, calm amidst the movement of people on all sides. Heather asks to pet Leroy before she and Tom and her QLI team members leave for the day. She is still gaining the strength to lift her arms on her own, but even now she shows a visible improvement from the week before—which Tom scribbles into his list.

In time, Heather wants to ride with Hayvn again on the ranch, wants to get back to being the hard worker, the inspiration, the role model, the mom, the wife.

As Heather pets Leroy for a final goodbye, Tom says “Yup. That’s her” one more time. As if to say that day is coming. As if to confirm that that person is still here and has been here all along.

*This story was first published courtesy of our friends at LoveYourBrain. To learn more about LoveYourBrain’s clinical services, visit their Clinical Affiliate information page at https://www.loveyourbrain.com/clinical-affiliate-program Even in those first […]